Guide to using BackgroundWorker in C#

Home
About
Programming
Puzzles
Math
Origami
MSPaint
Forum
There are lots of factors you have to consider when creating a multi-threaded program in .NET. Going about sharing memory directly will cause a crash without setting up everything just right. However, a lot of this work is conveniently bundled up and abstracted away from you in a .NET class called BackgroundWorker.

The BackgroundWorker does exactly as its title implies. It works in the background in a separate thread. This is great if you have some complex calculation or maybe you're connecting to a slow server from your application and it blocks the UI thread. However, the background worker is not ideal if you need constant communication between the two threads.

The background worker is set up such that it has several events attached to it that you add handlers to.

Here is a simple example that simulates performing a complex calculation using Thread.Sleep. This "calculation" takes 10 seconds to perform, which is plenty of time for Windows to think that the application is hanging if the user wildly clicks while the computer is churning numbers. In this example, the user presses the button which will then show a progress counter from 0 to 100% and then displays the result of the calculation. 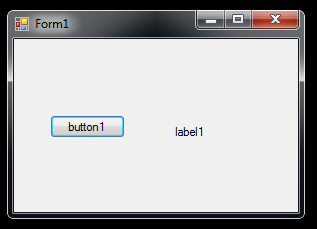 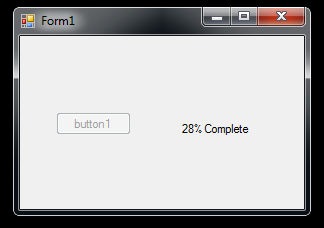 ...and then the final result when it's done.

A more detailed explanation of the BackgroundWorker's handlers and event args is discussed below the code.

The handler you add to this event will be run in a separate thread. The event args (DoWorkEventArgs) has two properties that are used to pass parameters to the background thread and send results back to the main thread.

When the background worker finishes its work, this event will be fired in the original thread. The RunWorkerEventArgs also has a property called Result which is set to the value you set Result to in the DoWorkEventArgs in the DoWork handler mentioned above.

This is how the DoWork event gets kicked off. RunWorkerAsynch, as you can probably guess, does not block the current thread's execution. It'll make the BackgroundWorker fire the DoWork event in a new thread, however, it's best to check the IsBusy property otherwise you'll get a crash if the worker as already been started. This could happen if, for example, you took out the code to disable the button above. Additionally, you can also pass an object into the RunWorkerAsynch method and it will appear in the DoWorkEventArgs as the Argument property mentioned above.

So now you have absolutely no excuse to block a UI thread in .NET.