Solving the Centers of a Patterned Rubik's Cube

If you have a cube where the stickers aren't just solid colors, but patterns, then you may have noticed that after solving the cube, the centers don't always orient themselves properly. This minor detail isn't covered in most Rubik's Cube solutions since everyone assumes you have a color cube. How unthoughtful.

Suppose you have a solved cube sans oriented centers. To rotate the center of one face in a trivial fashion, all you have to do is rotate that face. POOF. The center is rotated. However, now you have the 8 pieces around it in the wrong place. To put those pieces back, you have to undo the move you just made. It seems that you can only have one or the other.

Now, suppose you did your quarter turn to fix the center of the cube. Then, before returning the 8 pieces around it, you switched that center piece with another center, and then undid your first move. Then you returned the original centers to their initial position. You have turned a center, and then unturned a DIFFERENT center. That center and the surrounding edges are now all solved.

What are you talking about?

Suppose you have the following set up where the yellow and red center are orientation dependent and must each be rotated 90 degrees. 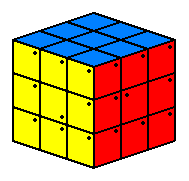 Now shuffle the centers to emulate this: 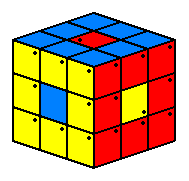 Now rotate the yellow center (and by "yellow" I mean the center on your cube that corresponds to yellow here) 90 degrees in such a way that it "fixes" it relative to the yellow face. 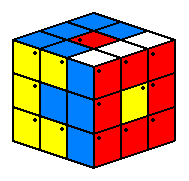 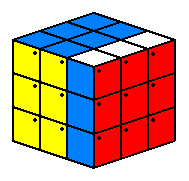 Now undo the shuffling you did in the first step. Since you rotated the surrounding 8 red pieces, then when the red center returns to the red face, it is correctly oriented...usually. 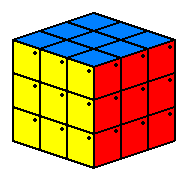